I have quite recently been having one of the most thoughtful … and thought provoking … exchanges with a new, conservative Facebook friend of mine.  Although his conservatism is certainly not a trait we both share, his complete aversion – abhorrence if you will – to Trump, is definitely something that has sparked common ground.  We also appear to be able to communicate respectfully – something which is not at all common in this increasingly partisan and vitriolic atmosphere in which we live.

We have been having our own political “Crossfire”, if you will, but absent of Dan Ackroyd’s famous response to Jane Curtin …

My friend’s latest response really got my writing juices flowing.  So much so, in fact, that when I tried to post the response to Facebook, I actually was prevented from doing so because it exceeded Facebook’s 8,000 character per response limit!  Did anyone else even know that there WAS that kind of limit on Facebook?  I certainly did not.

I can see an unfortunate pattern reoccurring with all of our recent back and forths. I end up agreeing with 95% or more of what you thoughtfully have written.  But then amongst all of that insight, you throw in some things that are the type of dog whistles that I believe significantly led to the ascendance of this man whom we both detest.

I clearly do not agree with your assertion that “one of the few laudable results of the 2016 election was the removal of the Clintons from our public life”.

I do not believe that Hillary would have been a particularly effective President.  But that would have been in large part due to exactly the type of partisan divide that we both lament in our current situation.

Listen to all of those irrational voices we constantly hear defending and excusing Trump, and attacking the justice system.  Those same voices of Nunes, Jordan, Gowdy, Fox News, et all would have been relentless in their daily attacks on Clinton.  With a Republican Congress, Clinton would have likely accomplished even less legislatively than Trump … if that is even somehow possible.

Hillary could have and would have done all of that even in spite of the constant cacophony of verbal and legal assault unleashed upon her by Republicans.

North Korea would still be a problem.  No illusions there.  Many competent (and not so competent) Presidents and administrations have tried for a long time to resolve that issue.  But who, other than Trump, now really believes that the world, and certainly South Korea and Japan, is safer from North Korea because of Trump’s bluster and nuclear annihilation threats? 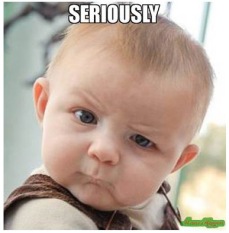 North Korea is a nuclear power.  That’s a fact.  The fantasy of them ever completely denuclearizing is so devastatingly ridiculous.  Why on Earth would Kim ever give up the one thing that has allowed him, and his father and grandfather, to be even marginally relevant on the world stage – Kim’s concern for the North Korean people?  Puh lease!

I can tell you what Hillary would NOT have done with North Korea.  She would have not have given that piece of garbage any sense of credibility or legitimacy by disgracefully meeting with him publicly, and in an equivocal setting.  The sight of the North Korean and American flags next to each other will forever turn my stomach.

Hillary would not have magically solved all of our immigration issues.  But she also would not have completely disgraced us, and hurt so many human beings in the process, with the family separation policy, and with the apparent cessation of any meaningful process of requesting asylum.

In fact, given that there is some bipartisan support for rational immigration policy change in the Congress, it is not unthinkable to believe that might have been one of Hillary’s few legislative successes.

In conclusion, I don’t find any of that to be at all supportive of the idea that Hillary’s removal from public life is the one good thing to come out of the 2016 elections.

Regarding those “dog whistles” I wrote about earlier.  I love how the term Socialist is applied to Bernie, and to Occasio-Cortez, with what is pretty obviously the primary intent of equating it with Communist ideology.  I will guarantee you that Socialist and Communist are indistinguishable with many people, and most certainly with most of Trump’s core supporters.

As I understand Socialism, it is the belief that government does  have the ability to protect its citizens in a way that would not otherwise be possible. That can manifest itself in providing basic services, such as defense, electricity, public transportation, waste management, to name a few.  Or it can also include healthcare and providing affordable education opportunities to everyone.

But democracy and socialism are not a mutually exclusive proposition.

Government can most certainly be democratic and yet support some socialist policies.  It is a difficult line to draw, and a line that the Democrats have not yet historically shown the willingness to always distinguish, but I do not fault Sanders, or Occasio-Cortez, or any number of other candidates who espouse that, for not being afraid to say that not only can  it be done, we must  find a way to do it.

The Democrats are dangerously close to their own dog whistle as well – Abolish ICE.

ICE should in no way be abolished, and I trust that those Democrats leaning that way come to that realization.  All that needs to be done with ICE is to return it to the function that it has reasonably served in the past – protecting our borders and ensuring legal immigration.    Take away the Draconian, racist directives that it has been given under the current administration.

I also disagree that a 3rd political party is some sort of likely path to a potential remedy of the political atmosphere that exists.

At this point in time, a credible 3rd party would only serve to guarantee that one or the other of the main political parties benefited by watering down the support of their main opponent.  Heck, Jill Stein was not anywhere near credible and her minimal support was all it took to push Trump over the edge.

Look at someone whom we both admire, though whom I did not support – George the 1st.  Ross Perot pretty much guaranteed that Bill Clinton would win.  Even if a 3rd party could somehow win, there is also no current way for a 3rd party to achieve any of the Congressional presence needed to at least attempt to force compromise with the other two warring major parties.

We had all better hope to God that the Democrats at the very least take back the House this fall.  For the benefit of the future Supreme Court, it would be much better to take the Senate as well.

But just think of it …

If the Republicans somehow retain control of both Houses, Trump will absolutely claim complete and total exoneration.

Somewhere along the line though, Putin will put the screws to his patsy.

And the entire United States will also be screwed in the process. 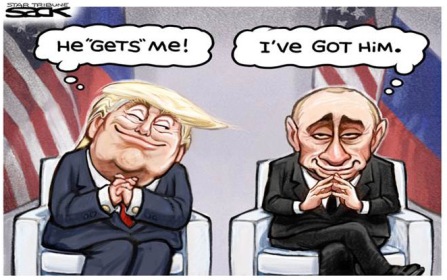 3 thoughts on “052 – MY RESPONSE TO A THOUGHTFUL, NON-TRUMP SUPPORTING CONSERVATIVE (An Editorial)”