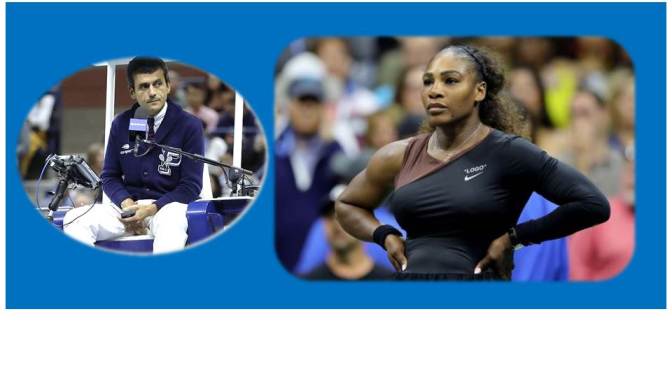 Now THAT is actually an example of Fake News.  But really.  How many of you at least might seriously entertain that he was just itching to tweet that sucker out?

Serena Williams embodies everything that really pisses Trump off.

#4 – She very likely considers Trump to be an incredible ass.  Admittedly, that does not exactly place Serena in a unique position. 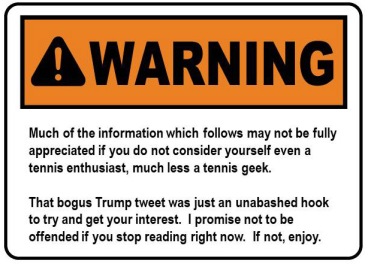 Serena has been taking a lot of flak and criticism, and that criticism has not necessarily been relegated to conservative media.  Clips of the confrontation often primarily have highlighted her smashing her racquet, which certainly was an example of her loss of control.

But there were three warnings issued to her in that final match – a Grand Slam final I remind you.

First, the warning for receiving coaching.

That is indeed a rule, but only for the men and also for women as well in the four, Grand Slam tournaments for both men and women.  Coaching is however allowed during game changeovers in regular season women’s tournaments sponsored by the WTA – Women’s Tennis Association.

Did Serena over-react to that?  Sure.  Shit happens in all sports.  Not everything is fair.  That is an unfortunate reality in all sports.  But it is no question that it upset her a great deal.

That coaching warning is VERY rarely if ever called and I would be very surprised if it has ever been called in any Grand Slam final before.  I could not locate any figures to back that assumption up, but as I say, I would be very surprised.  Any coach who is being honest, as was Serena’s, will tell you that coaching goes on all the time and is virtually never called as a warning.

To make that call in a Grand Slam final involving one of the greatest tennis players of all time, was an inexcusable insertion of himself into a match by that Chair Umpire.  That complete lack of judgement and restraint on his part was later exacerbated when he issued the third and final warning.

Second, the warning for racquet abuse.

No question, Serena deserved that one.  That warning is much more commonly given out and players are all very aware of it.   She later said that she was surprised that it resulted in the loss of a point, however, because she thought that the first warning had been withdrawn.  She was not arguing that she did not deserve this warning, but rather that she should not have been penalized a point because that first warning should never have happened.

Third, the warning for verbal abuse of an umpire.

This is also a warning that certainly is issued from time to time, and is not totally uncommon, even in Grand Slams.  It was not in place during the infamous era of tennis bad boys, including Jimmy Connors, Ilie Nastase and, of course, John McEnroe.  It was no doubt imposed in great part as a reaction to the incredible abuse inflicted upon umpires by those three men in particular.

What makes this particular warning stand out are the following.

Were any of the three warnings given not in strict accordance with existing rules?  No, they were not.

However, as I stated earlier.  Were 2 of the 3 warnings issued without any sense of restraint, or judgement, or situational awareness?  Of course they were.

Serena has chosen to raise the issue of sexism since Ramos, although a notoriously strict referee, has accepted much worse from male competitors.

I saw that former professional men’s player, and Wimbledon champion, Pat Cash from Australia, who is now a tennis commentator, said that sexism was not at all a factor.  That has to be taken with a truck load full of salt.

Here are just a few examples of the nuggets of liberated insight offered by Cash in the past.

Yeah, that’s the guy whom I certainly want to ask about whether sexism was at all in play in this scenario, especially when it involves one of the Williams sisters.

Chair Umpire Ramos should come to America.  As having shown himself to have poor judgement, to be almost certainly a sexist, and to also be quite possibly a racist as well, he will find the current America we are living in to be a welcoming new home.