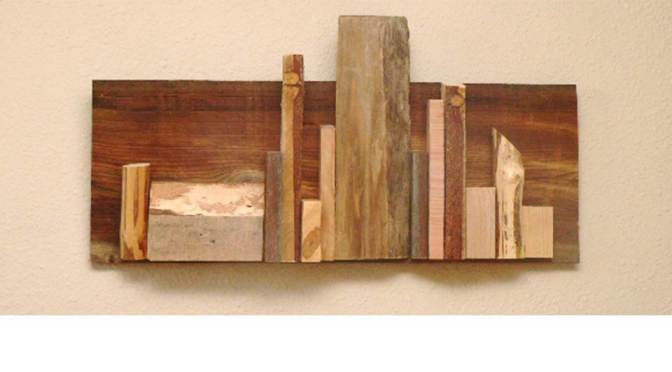 As kind of an interim little wood project, until I determine what the next larger one will be, I came across a pretty good sounding idea on the internet.  The project involved using pieces of otherwise scrap wood to create a wall hanging of a city skyline in 3D.

My projects are usually much more time consuming.  This one only took a few hours and I am very pleased with the results.  It is now hanging on the wall in my office.  It is fairly small – just about 24″ wide and about 8″ tall.  The picture below should give you a better idea of the relative size.

FYI.  For those interested, that is one of my mom’s oil paintings to the left of my project. 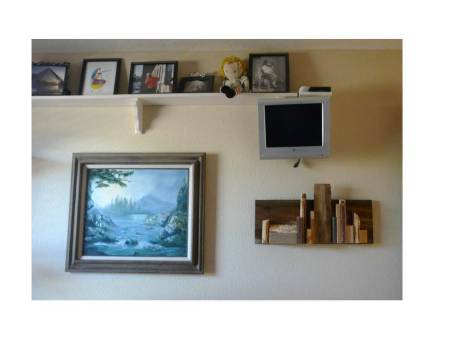 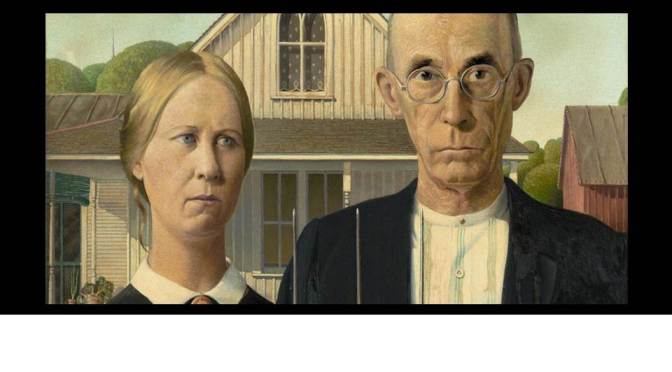 I just posted on Facebook that we voted today.  So, if any Democrat in New Mexico wins their race by just one vote, I hereby claim credit for that win!

Fortunately, we can vote early here in New Mexico. The registration process was also quite painless and easy. It’s a disgrace that it is not this easy EVERYWHERE and for EVERYONE !

Do you think we will live long enough to ever see Election Day be made into a national holiday? At the very least, it could be moved to a weekend.

Of course, there is a VERY important and relevant reason that Federal Election Day is on the first Tuesday of November.  NOT !

This tradition dates back to 1845 when a Federal law was enacted.  It specified the month and day primarily because of farmers, who made up the majority of the voting population at that time.  Tuesday was a day when farmers would traditionally be able to make the sometimes long trek into the town where they could vote.  November was chosen because it was after the crops were in, but before most of the hardest winter had set in as well.

So, it now makes perfect sense why the first Tuesday in November is Federal Election Day.

Perhaps you, or someone you know well, has complained how their vote does not mean anything anymore.  They believe that both sides are just as bad, so what’s the difference?

Uhhh.  Hello!  The 2016 election made a big friggin’ difference and we have paid a daily price for it for the last two years.

As a reminder, here are just a few reasons why there can be no excuses – you must vote.

The following is simply a list of the reasons that most quickly come to mind.  I am sure that you can add some which I have missed.  I have also not attempted to rank them in any particular order.  Any one would stand alone were it able to be attributed to any previous President.

In this election, THERE CAN BE NO THIRD ALTERNATIVE.  Electing Democrats, particularly women and minorities, is the only viable option available, at this point in time, to put the brakes on the Constitutional destruction that Trump is waging. 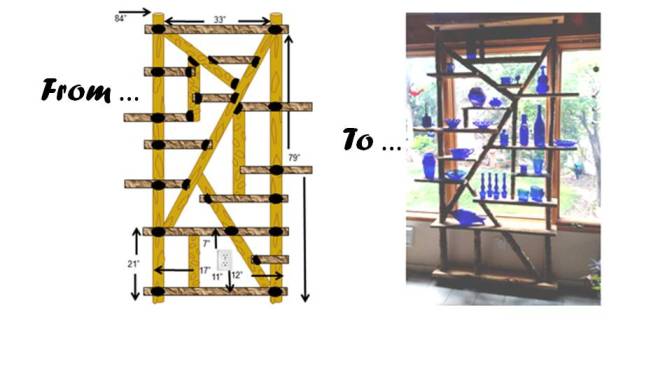 I actually got paid for my latest woodworking project.  That’s a first.  It is also clear confirmation as to why I do not do this for a living.  It takes way too long for me to complete, to ever think about being able to make a consistent profit at doing it.

But I enjoyed having this project to work on and must admit that I am now a bit deflated that it has been completed.  However, Deborah has another few projects on her honey-do list, so I will remain occupied until my next woodworking project comes along.

This started when Jan, a friend of ours, visited our home and was impressed with the window shelf that I had built and installed in our kitchen window.  Here is a picture of our window shelf.  There is also a post on this blog about that project which can be found in the left sidebar on the blog Home Page under … What’s Roger Up To? .

Jan has a sunroom with a number of large windows and she asked me to build a full length version similar to our window shelf.

Here are a few pictures as the project began to come together.  As usual, I first created a design in Powerpoint, and then saw it morph as I learned more.

I completed the project in early October and took the shelf over to Jan’s home.  She has quickly begun finding nick nacks to fill up the shelves.  Jan has a wonderful collection of blue glass. 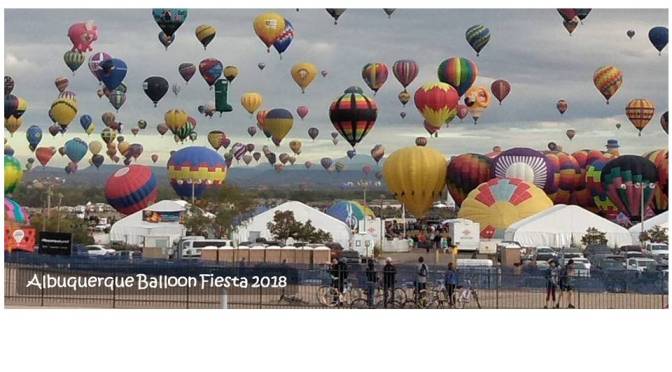 For those of you already familiar with us, you probably know that while not the main reason we decided to retire in the Albuquerque area of New Mexico, a decided benefit of living here is being able to experience the annual International Hot Air Balloon Fiesta.

I have another post in this blog about the Balloon Fiesta, which includes many of my favorite photos taken over the past few years.  With each new year, I now try to get at least a few pictures either of things I have not photographed previously, or from different perspectives.  If a picture turns out particularly well, it will get included in my master list of favorite balloon fiesta photos.  Here is one that I took this year which will likely be included in that master list.

This year marked a few new activities as well.  I decided to become involved in some volunteer work, this year for the International Hot Air Balloon Museum.  Next year, I plan to also do some volunteering for the Balloon Fiesta Organization which has more than 1000 volunteers each year participating in various activities during the nine days of Balloon Fiesta. 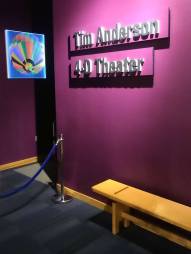 One of my volunteer activities this year included working as an usher at the 4D Theater inside the balloon museum.  We show two short films every 15 minutes throughout the day.

I also had a chance this year to participate as a member of one of the balloon crews.  Karen, a fellow docent of mine at the Albuquerque Zoo, asked me to help with their crew at Balloon Fiesta this year.  Her husband Johnny is a pilot and their balloon is named the “Rising Star”.  Here are a few pictures taken when we went out to an elementary school to do a demonstration the day before Balloon Fiesta began. 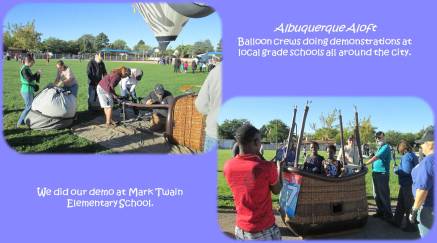 Balloons referred to as “Special Shapes” are always a highlight of the Balloon Fiesta.  Most people don’t realize that balloons do indeed come in many very unique and often recognizable shapes.  Many, if not most, of the special shape balloons, are made in Brazil.  Here are a few pics of some from this year, including one which is brand new – Vincent Van Gogh.  He is a pretty intimidating dude! 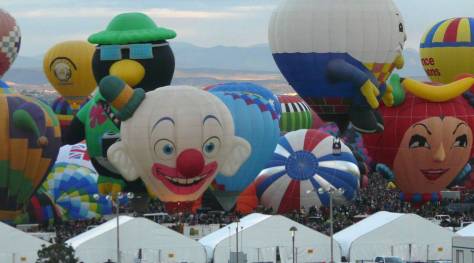 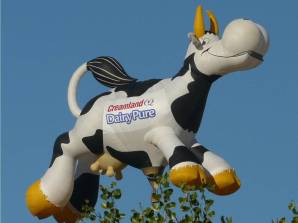 Working both at the 4D Theater, and as a courtesy cart driver, really allows interaction with visitors, whom not only come from all around the U.S., but from many other countries as well.  After Balloon Fiesta completes, I hope to soon begin training to become a docent at the Balloon Museum so that I might lead tours year round.

Between the Balloon Museum, the Albuquerque Zoo, the pet rescue and adoptions that Lucas and I help out, a local Episcopal Food Pantry, and now also the occasional balloon crewing I will do with “Rising Star”, that should keep me busy during retirement. 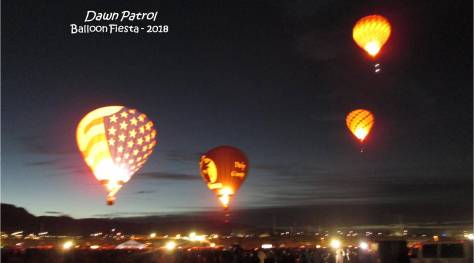