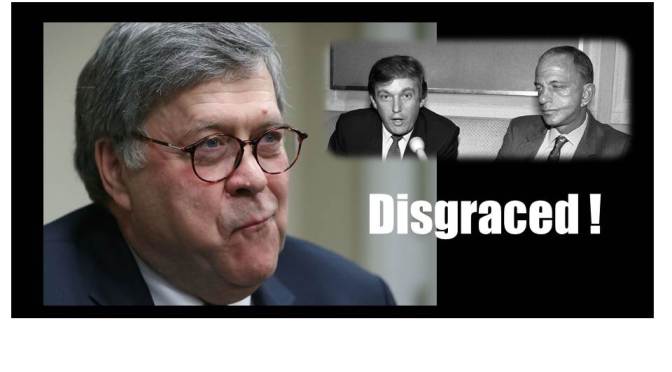 That is a significant element of the reason for any official, and particularly for one in a position of authority such as a judge … or an Attorney General … to recuse themselves from involvement in any specific case which may come before them.

Just as Donald Trump has made Richard Nixon seem almost quaint in his own blatant disregard of the law, William Barr has now actually made Jeff Sessions seem almost saintly because of his decision to recuse himself from the Mueller investigation.  When Jeff Sessions has to be looked upon as a role model for doing the right thing, then you know that something really  STINKS TO HIGH HEAVEN !

Likewise, Barr has made the totally unqualified flunky Matthew Whitaker look good in comparison to himself because despite everything Whitaker was obviously put in that position to do, he was for some reason not able to put the brakes on the Mueller investigation.

So now Barr comes out and, in his summary and comments on Mueller’s report, provides a total green light for the most corrupt individual ever to hold public office, at any time, to claim total vindication.

With each passing day over the past three years, it has been understandable to question how much lower this country can sink.

Now we know.  This is the rock bottom.

In less than a month and a half since Barr was confirmed by the Republican Senate, the Mueller investigation has come to an end, and wonder of all wonders, the conclusions of the report represent a total whitewash of Trump and of his campaign.

Amazing.  Barr was able to do all that, and in just 48 hours.  It’s almost as if he was prepared to do it all along.  YA THINK ?

Looks like you finally got the Roy Cohn you have so longingly been seeking, Donny.

Just as Whittaker did before him, Barr auditioned for the job as Attorney General in June of 2018 with his 19 page memo (manifesto) explaining all his supposed reasons for believing that a President was immune to charges of Obstruction of Justice.

He expressly said in that memo that Mueller’s investigation was “fatally misconceived”.  THAT is the same person who just wrote the summary that now essentially tries to completely exonerate Trump.   As to more of Barr’s history, yes he is a former Attorney General.  But he is also the same man who famously and strongly advised Pappy Bush to pardon all of the folks involved in the Iran-Contra scandal.  That certainly does not speak well for a person’s ability to be an unbiased arbiter on Obstruction of Justice.

I urge you to at least to scan through it, if not read it in its entirety, and then ask yourself the following …

“In what alternate universe can there be any doubt that the man who wrote that memo on Obstruction of Justice NOT recuse himself from being in a position to summarize the findings of the Mueller report?”

Now that the recusal bar has been set as low as humanly possible, what’s next?  I know.  How about the regents at the University of California – Fullerton asking Brett Kavanaugh to decide whether Dr. Christine Blasey Ford should receive tenure?

So where do we go now?

Unless and until Mueller’s complete report is released, and until Mueller himself is subpoenaed, if necessary, to testify in public to Congress,  Barr’s comments so far have not only irreparably removed any credibility from William Barr, but almost unbelievably, even Robert Mueller’s integrity can now been called into question.  In my wildest imagination, I never thought that I would ever think that, given what we have come to know about the man’s life history.

I really don’t give a damn about hearing William Barr testify in front of Congress.  What he says will have no more value than if Roger Stone was answering those same questions for him.

But Mueller is something else entirely.  We really need to hear in that man’s own words, and in public testimony before Congress, the answers to questions that I hardly think I am alone in having.

1:  The President told Lester Holt in the NBC interview that he fired James Comey because of the Russia investigation.

2:  The very next day after that interview was aired, in an Oval Office meeting with Russian officials Lavrov and Kislyak, Trump told them that “Comey was a real nut job” and that “I faced a great deal of pressure because of Russia.  That’s taken off.”

I am certainly no legal expert and yet I had very little trouble coming up with that most decidedly incomplete list of questions to ask Robert Mueller.   I am quite sure that if any of you reading this put your mind to it, you would likely have no problem in coming up with a few important additional questions that could be asked.

In fact, if you do have any additional suggestions for questions you would like to see Robert Mueller asked, I encourage you to please attach them in a comment to this editorial.

The Democratic Congress has not exactly demonstrated their collective ability (or willingness) to ask witnesses meaningful, insightful questions in the past.   It is almost due exclusively to the efforts of some freshmen Congresswomen that we have seen anything approaching serious inquiry.

Donald Trump has sought to disparage, demean and to otherwise completely undermine the system of Justice in this country since the day he took office.

William Barr, Rod Rosenstein and possibly now even Robert Mueller as well, have clearly made the Justice Department complicit in those efforts.