I just added the following new quote to my “Pithy Quotes” post which you can find in the lower right sidebar on my blog Home Page.

Police Lieutenant Milo Sturgis gets a call from a murder suspect who says he wants to talk and he asks Milo if they can meet.

Milo looks at his friend, Alex Delaware, and says “If I respond ‘Hell, yeah’, do you think that would sound too eager?”

I am a fan of reading fiction, in particular detective novels and also CIA/government thrillers.  I also gravitate toward books that feature the same characters so that you can get to know them, and the various regulars who interact with their lives. 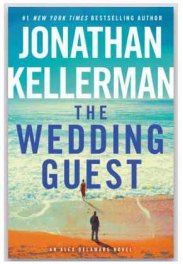 I just finished reading “The Wedding Guest“, which I believe is the latest in Jonathan Kellerman’s long running series featuring Child Psychologist Dr. Alex Delaware and his friend and cohort in murder resolution, Lieutenant Milo Sturgis.

This is also, I believe, the 34th novel featuring Alex and Milo.  At least for me, that is the second longest series next to the late Robert B. Parker’s series featuring Boston PI Spenser.  Counting the books which have continued to have been written after Parker’s death, I believe that series is well over 50 by now.

If this sounds like something that might be of interest, always a good place to start is at the beginning, as I did when I started travelling for work almost 17 years ago.  The first Alex Delaware novel is “When the Bough Breaks” published in 1985.

Jonathan Kellerman has also co-written novels with his wife Faye, a successful novelist, as well as his son, Jesse Kellerman.

If you’re interested in learning a bit more about Jonathan Kellerman, the following is a link to a You Tube video of a 30 minute question and answer session he did at a book signing.  He doesn’t talk a lot about the Delaware novels, although he does get a question about Alex’s gay police Lieutenant cohort, Milo, near the end.