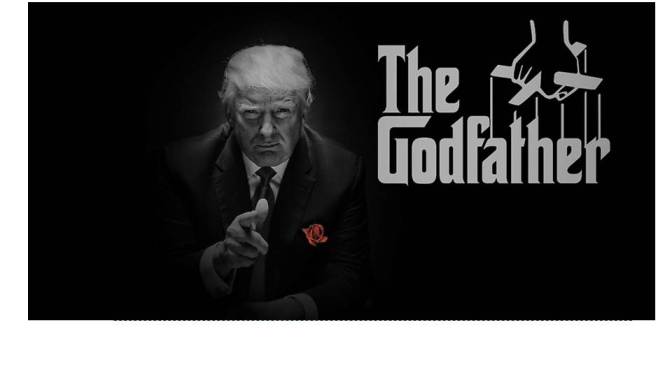 If you can’t see this coming, you just aren’t looking hard enough.  Oh Hell, you’re just not looking at all.  If the things we’ve heard and seen over the past year and a half have taught us anything, it should be that the arrogant egotist that occupies the Oval Office will do or say anything.

In a perfect world, you would like to think that there is a John Dean lying in the weeds somewhere who, in order to save his own skin or maybe even, God forbid, to just do the right thing, will be finally willing to turn on the Prevaricator in Chief.  But for all the similarities to Watergate, there is a big difference now.  Any potential new John Dean knows that no matter how convincing and verifiable his tale, he will be vilified like no other before.  Ok, Nixon did try some of that to be sure, but he didn’t have social media – especially Twitter.  30-40% of the American public will continue to believe every despicable thing that is said to discredit whoever might even think about turning on Trump.  Republican Congressmen and women, while perhaps not really believing it, will nonetheless remain quiet for the most part, if not actively participate in the personal attacks.

High tech lynching?  Clarence Thomas, you ain’t seen nothing yet.

Jeff Sessions appears to be next in line to take a fall and, when he does, I hold no hope whatsoever that he will be the new John Dean.  He has proven time and again to be a totally impotent pawn of the Donald.  He has already meekly accepted, without any personal defense, or any defense of the justice department which he serves, that incredible trashing unleashed upon him by the Donald this past week.  He may be holding out on resigning, hoping that being fired by the Donald will somehow be more honorable than resignation.  But he is a goner, make no mistake.

Once Sessions is gone, he will be replaced by someone who is ready and willing to fire Mueller and to declare the investigation complete.  Trump will not nominate anyone who has not given him his personal assurance that he will do so.  The Senate will, of course, demand that the new prospective Attorney General will promise not to fire Mueller, and the nominee will either outright lie saying he will not, or will try and get away with an answer that provides him wiggle room.  The second is the more likely scenario because that will also give Republican Senators more wiggle room to confirm his nomination.

Once a new attorney general is confirmed, it will only be a matter of time before the Trumped up excuses will be used to justify Mueller’s firing.  You may hear some verbal outrage on the Republicans part, but they won’t have the stones enough to do anything about it.   Because, if they do, Trump’s voters may no longer have enough power to get them re-elected, but they still have enough power within the Republican party to get them primary’ed right out of any chance to even run for re-election. 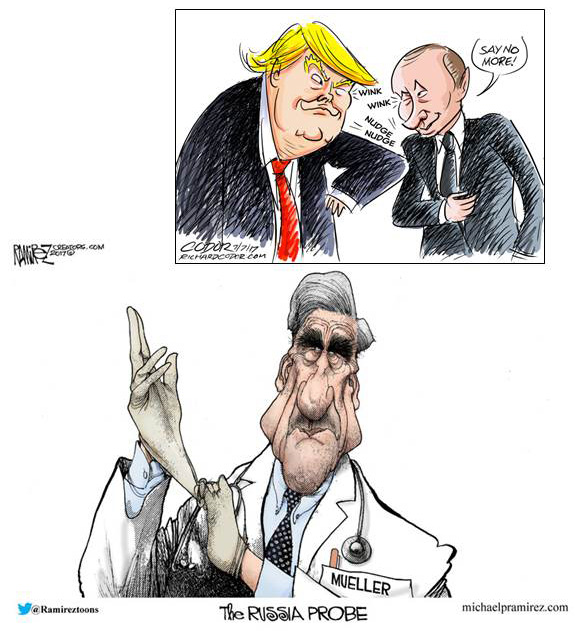 What about any other potential John Deans?

Sean Spicer?  Give me a break.  Talk about being spineless.  Anyone who has continually allowed themselves to be the subject of well-deserved ridicule for repeating the boldface lies of his boss, has unquestionably demonstrated that he has no spine nor self-respect.

Mike Flynn?  He has proven to be one of many unprincipled guns for hire with whom the Donald has surrounded himself.  “I have a story to tell.”  Yeah, right.  I’ll believe that when it happens.  If anyone has received a proactive, secret guarantee of a pardon, it would be Flynn.

Steve Bannon?  He would be SO lynched by the loyal Trumpsters, and even the Breitbart crowd, that I have never even given his turning on Trump any consideration whatsoever.

Family members – Ivanka, Donny Jr. and Jared?  Hey, what’s a family for?  Did you really think the Donald placed Ivanka and Jared so close JUST because they are family?  Would any of the Corleone family have ever turned on Vito … or Michael?  I don’t think so.  Even Fredo Corleone (uhh, I mean Eric Trump) didn’t turn on Michael.  But Fredo was such a total loser, he could have been easily manipulated into doing so without realizing it.  So family or not, Michael had to act on Fredo.   Sound familiar?  Watch your back, Eric.

Paul Manafort?  Hmmm.  Another of those guns for hire like Flynn, but I see a difference with him.  Manafort has received millions in payments from foreign governments, and also likely has many more millions in loans to many of those governments and individuals.  He was also jettisoned from Trump’s orbit fairly early on, but still was with him long enough to be able to reveal really damaging information.  I’ll bet I’m not the only one who thinks Manafort is a good candidate as being the one who blew the whistle on Donny Jr’s meeting with the Russians last June.  What a great way to stick the knife into both Donny Jr and to Jared, with whom I’m sure there is no love lost with Manafort.  I’m sure that possibility has not been lost on the Donald either.

Manafort is capable of being squeezed big-time by Mueller, should Mueller’s investigation be allowed to continue.  He is probably another very good candidate for one of those proactive pardons.  But even with a pardon, he would still be on the hook to a lot of unsavory people, i.e. governments, for those millions in payments and loans.  Trump may be able to pardon him but he can’t offer witness protection.  That may be Mueller’s ace-in-the-hole. 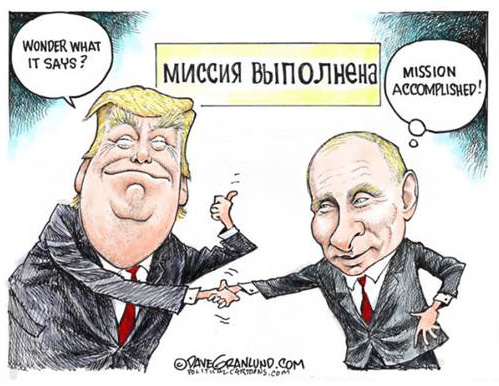 No one else really comes to mind.  It would take someone who is in a high enough position, and who has been with Trump long enough, to do any significant damage … and I don’t see anyone else who fits that bill.

I should say … no one other  than Putin.  He has always held all the cards, but why kill the Golden Goose – the gift that keeps on giving?  Even if Trump is not able to get sanctions lifted, which is looking increasingly less likely, Trump has done so much already to strengthen Putin’s position in the world, that Putin can already claim the hacking and collusion to be a phenomenal success.  The confusion, disarray, chaos and the elemental distrust and division that have been taken to such an incredible level in American society can only be considered icing on the Putin cake.  He is such a clear winner in all of this.  What a grand reward for someone who has deceived, stolen and assassinated his way to the top.

So congrats, Vlad.  Satan would be proud … if he weren’t so envious.